At Mohali in 2010,VVS Laxman revealed why for the last time

Bring me my Bow of burning gold;

Bring me my Arrows of desire:

Bring me my Chariot of fire!

They counted on that sore lower vertebra of his too much and forgot the man had a spine attached to it. In the first outing, pain had chained his reach and rasp. He came late and left early, half cocking a benign dipper into the slips: VVS Laxman, caught Michael Clarke bowled Nathan Hauritz for two.

This morning he put a bone to his back, like a warrior would put sword to scabbard, and strode into the field of slaughter, unbothered that it was already soaked in blood and more would leap from the spoils to stain his whites. For him this was a classic triple-relish moment. Laxman favours the second innings, he favours a fight to the finish even more. But ever more than any of that, he has a fondness for favouring the Aussies with silken dictatorship. It began as an adolescent fancy, punishing the men from Down Under, then flowered from hobby to habit to hallmark. 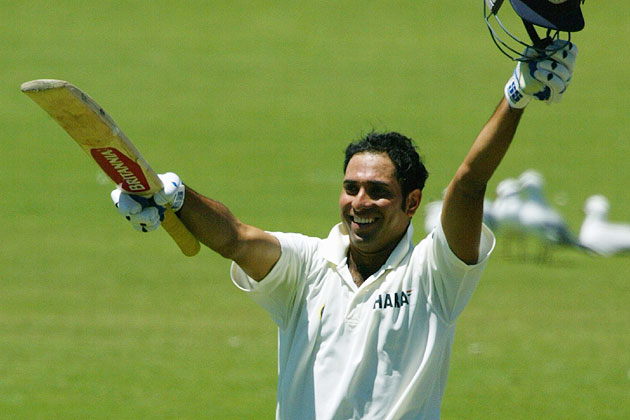 As a colt, he played three Under-19 tests against the Australians in the spring of 1994. The visitors’ attack was laced with such lethal future stars as Brett Lee, Jason Gillespie and Andrew Symonds. Laxman lashed three tons and ended the series averaging 110.25. Ricky Ponting’s men should have remembered.

Laxman, on his part, hasn’t lacked for reminding them. A blistering 167 off 198 balls in the 2000 Sydney Test that almost saved the game for India and his place in the side after a wretched patch on the green.

A year later, that blockbuster 281 at Eden that won India the match by a mile after having followed on. In the 2003-2004 season, two spanking hundreds in the Adelaide and Sydney Tests that robbed Steve Waugh victory in his farewell series. In 2008, two more tons separated by six thousand miles that lie between India and Australia — 109 in Sydney, where he isn’t allowed to score less than three figures, and a double-hundred at Delhi’s Ferozeshah Kotla.

But to count his contribution by the weight of runs — in Sri Lanka this July Laxman quietly nudged out Sourav Ganguly to become India’s fourth highest Test scorer after Tendulkar, Dravid and Gavaskar — is to rob him credit. It’s the manner and mien in which he gets them. Like a swan picks its pearls, wantonly, with singular sense of élan and entitlement.

Mythic? The swan and pearls tale? So’s Laxman. Who else can blaze the ball to midwicket when his preparatory essay has led everyone to believe he’d play it to cover? Who else can give brutality on bowling the feel of a caress? Who else can reveal a smile as broad as his blade in the act of slaying? Who else could have done what he did, yet again, this day at Mohali? With a feeble back and feebler partners at the other end? Look around and tell. Look around the Indian dressing room and tell if your gaze can come to rest on anyone other than this delectable demon.

It’s a gathering of too many Gods, the Indian batting bench. Sehwag will destroy the opposition on his day, Dravid with stay and sparkle, Tendulkar has travelled where no cricketer has ever been and continues to cut his furrow beyond reach of mortals.

In this starlit cradle of cricketing celebrities, Laxman is quite the odd and ugly duckling. He rarely gets endorsements, he is shy and stumbling on camera, almost gauche out of his flannels, his life off the field isn’t worth media pursuit. But once he’s crossed the ropes into the arena, the duckling morphs into a swan; when he squawks and flaps his whiten wings, he scares and scatters the big fish.

When India’s batting Gods have all departed and crisis is centrestage, like it was today, it’s time for Laxman to parade the sublime human virtues — patience, fortitude, endurance, defiance. There he was amid the mayhem of the Mohali pitch, as very often in the past, statuesque of built, gladiatorial of grit, unfazed of circumstance and unfussed of method, almost unaware of defeat echoing from where he taps his bat on the crease.

Consider this: the man they often disparage as a slow coach — unjustly, but will someone speak up for Laxman because he’s too modest to do that himself? — got 73 unbeaten and match-winning runs today off 79 balls. Eight fours, each a scorcher this side and that of the wicket. Then consider that when he walked in, half the Indian side lay plucked and they were still 140 adrift. Fifty runs on, three more wickets had tumbled, Tendulkar and Dhoni among them. The innings blown to rafters, Ponting spitting into his palms and licking the prospect of his first Test conquest as captain on Indian soil.

Laxman now had no more luxury than the company of Ishant Sharma and Pragyan Ojha, the frail tail of the wreckage. That’s when he unveiled his spine; Ishant rode it particularly well and Laxman held it firm enough to frustrate his favoured opponents into a flurry of frantic byes. The toughest nuts on the field of sport, cracked under the persistence of Laxman’s softened back, the swan’s favoured pearls pitilessly picked.

In 25 Tests against Australia, Laxman scored 2279 runs at an average of 55.58. These included six hundreds and 11 fifties. Two of them were double tons, the highest among them the match-winning 281 at the Eden Gardens in 2001, much against the run of play. Of Laxman’s six ODI hundreds, four were struck against the Aussies