Or, why we refuse to look where blame might lie

Sanjay Dutt was still only a celluloid khalnayak, protagonist of Subhash Ghai’s magnum, a wickedly stained and lovable villain. What we knew of his real life delinquencies were still juvenile of nature and evoked sympathy, the drifter son of Sunil and Nargis, struggling to emerge from his haze of addictions. What we knew was that posters of Khalnayak were in print. What we still didn’t know was that Sanjay Dutt’s personal life had surreptitiously imitated his public art.

Dawood Ibrahim was still a latter-day imitation of Haji Mastan, no more: a beach bandit, a gully don who had slipped away to Dubai to elude the law and grab more riches. Yakub Memon was still nameless chartered accountant working off a hole in the wall on the ragged Mahim shoreline.

The pigeons at Gateway of India hadn’t been acquainted to mid-flight expiry by explosion. The liveried valets at the Taj knew better manners than to usher guests to submit to metal detectors.

Mumbai was still called Bombay. And Ajmal Kasab was still 15 years adrift, a six-year-old scraping dust and deprivation in Pakistan’s Okara, quite innocent that destiny was setting him up to violently flame and be extinguished.

And yet 1993 seemed like it could never ever get worse for Bombay. An apocalyptic visitation that came well foretold, never mind those that chose not to take note. 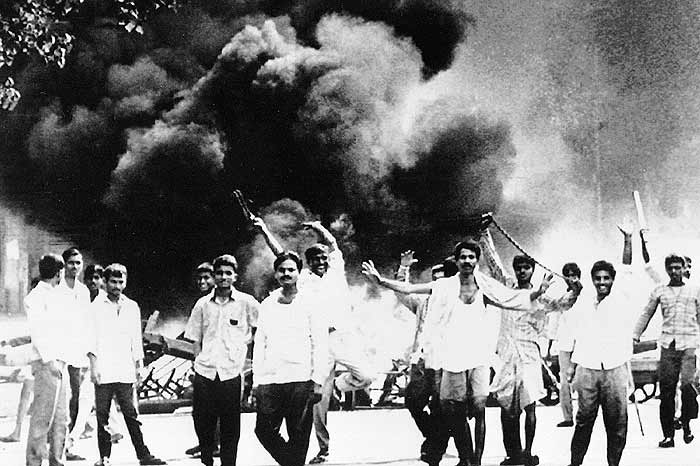 A week-long street frenzy had erupted followed the demolition of the Babri Masjid the December just gone. The official toll of sectarian clashes: 278.

In January, a horrendous accounting of unsettled scores unfolded. As the Congress government of the day looked on, mute, paralysed, Shiv Sena-powered mobs put the city to sword and fire. Or branded parts of it — Bhendi Bazar, Nagpada, Pydhonie, Reay Raod, Crawford Market, neighbourhoods of Khar and Mahim. Over an untrammelled fortnight of violence, more than six hundred persons were killed — stabbed, shot, set alight. Thousands were displaced. Trust died. Bombay’s fanciful claims to being an island of cosmopolitan libertines lay cauterised. The two weeks I spent reporting that mayhem for The Telegraph remain seminal in my memory of the unspeakable horrors Indians can wreak upon Indians.

Bombay’s transition to Mumbai not long after was both symbolic and symptomatic of what changed in that fortnight. Its tragic tryst with the bombings just a few weeks down, in March, was decreed the same fortnight.

Surreally, nobody seemed to make the link to begin with. Surreally, events around the the Bombay blasts of March 12,1993 have a way of getting tangled with Sri Lanka and its conflict with the LTTE. Today’s Supreme Court verdict on the blast accused arrived twined with the controversial UNHCR vote in Geneva on Sri Lanka’s opaque military campaign to wipe out the LTTE. Back then, in the stupefying echo of the 13 explosions that rang out from the nerve-centres of the business capital, a suspected LTTE operative was the first one to be nabbed. A Tamil of Sri Lankan origin who had changed suspiciously high amounts of US dollars into Indian currency the previous week. Some sleuths were quick to make a link. LTTE boss V. Prabhakaran’s key aide, Kittu, had recently taken a mysterious hit in the Palk Strait and died. An Indian hand was suspected; this was the LTTE hitting back. It seemed to have struck very few that this could have been a home-grown reprisal for home-grown grouses.

It took three days — and the discovery of an arms cache in an abandoned Maruti van — for the crime to be traced to the Memons of Mahim and their runaway patron Dawood Ibrahim. It took four days — and evidence given out by a Byculla scooter dealer who has sold three two-wheelers that were later booby trapped for the explosions — for the needle of suspicion to turn firm on the Memon network having acted to Dawood’s remote commands of vengeance. It has taken 20 years for final judgement to come, but probes and pronouncements still demur from making any linkages to what happened in Bombay immediately before the blasts happened.

Bombay still lay rained under the debris of Friday, the 12th’s detonations when I arrived the following morning. Bombayites — Mumbaikars today — were trampling it to work — to the blown Stock Exchange on Dalal Street, to offices around Nariman Point, where Air India’s “Maharaja” had been shaken off its pedestal, to shops in Zaveri Bazar’s soot-ridden lanes, to Sahar Airport.

There was a young boy, kit-bag slung on his back, returning from nets, probably with Sachin Tendulkar on his mind. Groups of young girls streaming towards fashion arcades on Peddar Road. The first cricket Test between India and Zimbabwe was underway at the Ferozeshah Kotla in Delhi; radio commentary streamed down the balconies and off cigarette kiosks.

Bombay was clearly on edge, but equally clearly, and quickly, it wanted to transit to business as usual. When one major landmark after another had popped the previous day like chestnuts in fire, Bombay people had lined up their cars to rush the injured to hospitals. They had put out impromptu appeals for blood on the roadsides, they had formed platoons to help the firemen clear rubble. The “indomitable spirit of Bombay” — that which the city would come to indignantly gnash at when cataclysm arrived fifteen years later on Kasab’s dinghy — was on rampant display. A city that has recently been at bloody war with itself stunned into picking up the shattered pieces. Twenty years on, not enough of them may have been put back in place to restore what used to be.