Clearly peeved by the Congress vice president’s abrupt offensive, Manmohan Singh has set up a hard-talk date with top Congress and cabinet colleagues tomorrow to pick a credible way out of the raging public embarrassment the UPA has inflicted on itself. As he flew home tonight after key bilateral and multilateral engagements in the United States, a key prime ministerial aide told The Telegraph that Singh had been “taken aback” by Rahul’s intervention and “left upset”, but also that he was “firmly of the view a final decision had to be thought through in consultation with the party and government allies”. 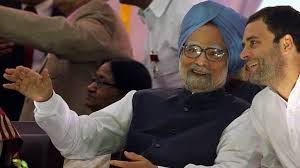 Quitting the job is far from the Prime Minister’s mind; questioning the causes of his current discomfiture is a closer description of his mood. “…When I go back I will try to find out the reasons why it had to be done that way and how do we handle it,” Singh told journalists on the special back from the United States, making it plain that Rahul’s positioning had both stumped and mortified him. When asked if he had been hurt that Rahul had torn into the ordinance while he was abroad, Singh said, “Well. I am not the master of what people say…I have been used to ups and downs and don’t get easily upset.”

Read between the lines, the Prime Minister was saying he disapproved of what Rahul said and the manner he said it, but he was determined to square up to the situation and straighten it as far as he could. “There is no question of resigning,” he bluntly held out, “I will put all these issues before my Cabinet colleagues. These are all matters which are discussed before the highest body, the core group of the Congress Party. The Cabinet discussed this matter twice, not once. But it is always possible to change one’s mind and I will consult my colleagues on all these issues.”

First up in those consultations, after October 2 obligations at Rajghat have been fulfilled, will be a one-on-one with Rahul Gandhi at 7 Race Course Road. The appointed Congress heir is a man Manmohan Singh has publicly committed to “working under” after 2014, but he left no hint today he will allow himself to be swayed solely by what the Congress vice president has to tell him. “I have seen Mr. Rahul Gandhi’s statement. He has written to me on this subject also and let me say that when issues are raised in a democracy, in a democratic polity, the right course to start with is trying to understand what is agitating the mind of the concerned people. When I go back, I will discuss these matters with Mr. Rahul Gandhi. He has asked for a meeting with me and I will also take my Cabinet colleagues also in to confidence. We will see which way the wind blows.”

Asked pointedly whether he thought one person should be able to undermine the decision of the cabinet and the Congress core group, Singh appeared to take a more conciliatory, though academic, position. “No, I don’t feel that way. I honestly feel that if there is an important point of view, any member of the Congress Party, any member of my Cabinet is free to raise issues and require reconsideration of issues. I think that’s what a democracy is about. I don’t think we are an authoritarian structure in which one person lays down the line all the way and therefore my humble feeling is that when a point of view has been expressed, we must sit together and understand what is agitating the mind of the person who has raised these issue and that’s what we will do,” the Prime Minister said.

It may well be that the Congress and the UPA are able to ride over this thorny hump in the days to come, but that will probably happen on the back of some terse give and take in the power backrooms.

Following his meeting with Rahul, the Prime Minister will also host a meeting of the Congress core group and a session of the cabinet summoned last minute to grapple with the tricky pass Rahul’s outspoken opposition to the ordinance has brought the government to. Between such hectic, and probably nerve racking, engagements, the Prime Minister must also find time to bid farewell to President Pranab Mukherjee who is scheduled to depart for Belgium and Turkey tomorrow afternoon. Ahead of his departure, Mukherjee has sent the ordinance back the government, flagging several provisions and the need to push it through at this time.

Sources indicated to The Telegraph late tonight that the controversial ordinance as it stands today may be dead, but the effort to “institute legal correctives” will continue. The government, sources hinted, could be mulling two options as an immediate way out of what they called an “unexpected and self-invited” crisis — to refer the issue to the Supreme Court, and thereby dropping the hot brick in cold storage, or sitting on Presidential queries to the ordinance on a specifically spelt out promise of bringing a bill in Parliament’s winter session to achieve what the ordinance could not. “The truth is that political parties across the board have genuine and justifiable problems with the law as it is,” the sources said, “political careers could get hurt for reasons other than proven culpability, there are issues of jurisprudence and appellate rights, they cannot be brushed aside, it is not a black and white thing.”

If the Prime Minister is treading a tough line, he may be doing so secure in the knowledge that he continues to enjoy the unstinted support of his effective boss and UPA chairperson Sonia Gandhi. Sonia has gone out her way the past couple of days to not merely publicly defend Manmohan Singh’s leadership of the nation but also to strongly endorse it. Addressing public meetings in Kerala and Karnataka, Sonia appeared keen to ally any sense that the dispute over the ordinance reflected a covert court-coup against Manmohan Singh. Rahul himself wrote to the Prime Minister soon after his denunciation of the ordinance, expressing his deep and continued respect for him, an act, many believe, to have been expressly prompted by Sonia herself. But if there is the dynamic of a generational shift in Congress thinking without any prejudice to Rahul’s stated respect for Manmohan Singh’s leadership, it will be absorbing to watch.

Speaking for himself, the Prime Minister appeared keen at the steering wheel, even willing to wager a third successive term in power for the UPA on the record of his government’s performance. “It is too early for me to make an assessment. It is for the people to make an assessment,” he said on electoral prospects, adding, humbly, “I have every reason to believe that we may have done something wrong but we have done many good things and the people of India, generous and tolerant that they are, they will take into account the good work, the solid achievements of the UPA into account before they cast their votes.” To a related question on the rise of Narendra Modi as the UPA’s chief challenger, he responded uncharacteristically combative. “I sincerely hope that all secular forces would combine to face the onslaught of people like Mr. Narendra Modi. And I have every reason to believe that that will happen. You wait for some time before the people realise what they are up against,” he said. For the moment, though, it would appear, it is the Prime Minister up against the man who would be his successor.