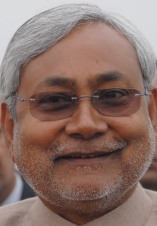 This is going to be a two-in-one enactment, make no mistake about it. On paper, assembly polls are still a year and a half off, but this summer’s Lok Sabha verdict will be a decisive roll of the dice in the battle for Bihar. It’s a fool’s estimate the parliamentary numbers of 2014 will bring closure to the re-division of the Bihari pie; they will only set the stage for the final settlement of 2015.

Who’s to tell if the climax will even hold off that long? Chief Minister Nitish Kumar’s is, after all, a minority government perched on a wafer that could give to the slightest shift in the balance of power.

Of all the paradoxes that pervade the radical re-arrangement of battlements since Nitish abrogated his alliance with the BJP last June, the hardest to miss is probably this: he survives on the support of arguably the most insignificant player in the field called the Congress, and the Congress is running three-legged with his old adversary Laloo Yadav.

And this one is probably the most pertinent: Nitish has never won a Bihar election without being in league with the party that he now must fight: the BJP. If the coming election will be test of whether Narendra Modi can arrive from afar and spur the BJP to new heartland conquests, it is also going to yield a measure of whether Nitish can stand on his own feet and retain his space. This may be a parliamentary poll — “oopar ka chunav”, as constituents call it — but its consequences will not stop at re-shaping Delhi; they will colour Bihar’s political map anew.

The realm that Nitish has ruled nearly a decade now is under siege. It’s Laloo trying to wedge back in on one flank, the Modi-led BJP pressing on the other with a new and not unsubstantive ally in Ram Vilas Paswan of the Lok Janshakti Party (LJP). Time for the huge gamble Nitish took in cutting off the BJP to pay off or leave him punctured, in desperate need of a refit.

The chief minister has rebuffed polls that consistently show him lagging — “Wait till the people of Bihar have spoken, then come an ask me who won, who lost, I do not believe in manufactured waves.” But his losses are on the table for anyone to tally; the BJP has a vocal constituency and a vote-share — upper castes, roughly 11 percent — that has now turned hostile on him.

Nitish counted on ample compensation from Bihar’s Muslims, about 16 percent — a reward for waging war on Modi as “divisive and communal” even at the price of losing an old ally and putting his government at risk. But whether Bihar’s minorities will offer him that reward, and in what measure they will do it, is a question floating overhead, teasing the grasp of players and analysts alike. There is an older and very doughty claimant of minority sympathies in the fray called Laloo Yadav, who has made mocking Nitish’s secular credentials his leitmotif: “Secular? The man who sat seventeen years in the BJP’s lap? The man who is okay with Advani’s BJP but not Modi’s?”

The key to getting the endorsement of Muslims, warily intoned to Modi’s risen pitch across the state, will be to project winnability. Between Nitish and Laloo, Muslims are more likely to make choices from constituency to constituency, careful to pull their weight behind whoever they perceive as the stronger bet against the BJP.

But the electoral behaviour of other critical caste groups in Bihar this summer may be no less enigmatic. Traditionally, broad caste segments have acted out of a calcified bias to this party or the other — the upper castes for the BJP and, to a far smaller degree, the Congress; backwards and Dalits divided between the two Mandal-Janata formations led by Nitish Kumar and Laloo Yadav. The belligerent entry of an outsider could well tear into some of that masonry and pull asunder conventional voter patterns.

A palpable new energy attends Narendra Modi’s focused bid to unsettle, and finally unseat, Nitish Kumar, a man whose aversion he has responded to with hostility. The argument between the two has turned more acrid by the day. Bihar, with 40 Lok Sabha seats, is critical to Modi’s push for power, but that may not be the only reason the NDA’s prime ministerial nominee is making a sharp point of pinning attention on the state. There is a Nitish-Modi grudge bout playing out and it’s not far to suggest Modi is getting the better of it. The tides that have turned up at his chopper-halts are not the only clue Modi has shaken up Bihar’s poll matrix.

For a while now, sections of Yadavs, roughly 16 percent and the most dominant of backward communities, have displayed an excitement for Modi that took many state BJP leaders by surprise. It is such sentiment, probably, that made Laloo lieutenant Ram Kripal Yadav’s switch to the BJP an easy decision to make. Modi, on his part, has not addressed a single Bihar rally without making a direct appeal to “Yaduvanshi brethren” (Yadavs) to climb his bandwagon; the subtext to the Modi campaign, of course, is his newfound political identity as a “backward leader” (Ghanchi-teli) from Gujarat himself. “My estimate is our victories in Yadav-dominated pockets will be stunning,” Ravi Shankar Yadav, key BJP playmaker in the state, has repeatedly claimed, “The enthusiasm among them for Modiji is to be seen to be believed, the verdict from Bihar will be the most stunning one, mark my words.” The BJP’s new claims on the OBC vote don’t come from campaign bluster alone; it is hoping the quiet and targeted constituency building Sangh activists did among extremely backward sections — Nitish’s core socio-political base — while they were in government will pay off.

Nitish and Laloo have, alike, ridiculed such claims, arguing it is coming “deliberately manufactured” by “corporate-aided media” and upper caste listening posts. “Bihar is very politically conscious, people can’t be fooled,” Laloo told The Telegraph at the start of the campaign, “Do I know this state better or that Narendra Modi? Bihar will reject a divisive man like him outright.”

In the welter of such shrill rhetoric, the governance/development discourse — Nitish Kumar’s salient claim to fame — has got somewhat drowned. Typically, equations of caste and creed have returned to dominate the political calculus. It’s not about who had done — or not done — what, it is about who is allying — or breaking — with who. Should Nitish be tripped by the changing equations, his only solace may lie in fine-print footnotes to most surveys coming out of Bihar — despite his party being predicted to do poorly, Nitish’s personal ratings continue to soar above local competition. How, or if, he is able to make that count is entirely down to him, just as his gamble against Modi was.