Holy shit! Now, before you start to make erroneous assumptions about my upbringing being uncultured, or lighting into me for being poorly spoken, think again. What else can this shit be but holy. I do not even wish to so much as append that sentence with a question mark; that’s merely, and as any intelligent person would instantly recognise, rhetorical. It is cow shit. Or bull shit. In any or either event, it is shit off bovine orifices. This shit must be holy. Gau. Mata. Saandh. Pita . Okay, forget the saandh and the pita, let’s not be patriarchal for once. Just think Gau. Then the natural thought is Mata. (And very often, then, the natural thought is also Bharat, for Bharat too has a Mata, but let’s focus on immediate concerns for the moment, let’s not get ahead of the script.) Then think shit. Plop, plop!! Holy. Shit. Holyshit! Do not blame me for being poorly brought up. Or for being poorly spoken. If that does not constitute holy shit, you are either fit to be labelled anti-national or I am so much an intoxicated Bhakt, I no longer understand the consequences of being drunk upon what’s dripping down those udders. 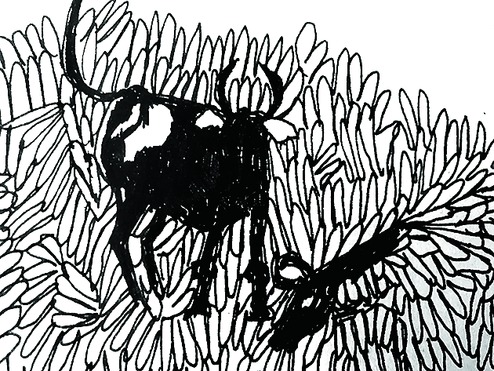 Look at them, just look at the state of them. Gau and what the Gau begot. Just for a moment behold them and the plenty around them. Behold the sheer pride and richness of being Gau in these times. They shat, and they created a beauteous plenty about them. Just look at them. It’s like they shat jewels, priceless jewels. One of them, if you were to carefully observe the accompanying illustration, has already shat and is proudly saluting with its tail all there is to be saluted, and the other is in the process of shitting more of the richness that this kind of shit has already conjured. Holy shit. Holy shit! Just look at the pair of them at work, one just done, the other in the process. Begetting holy shit in surrounds already and instantly and visibly enriched by holy shit. It’s all lush, the topography seeded with holy shit, can you not bring yourself to see?

Sometimes you so deeply wish Mahadeb were here, around his life’s chosen station, to see what his ilk can also achieve; what makes the critical cut between a chaiwala and The Chaiwala. It’s all down to him, all of this holy shit. It is he who inspired them, these cows, to shit so copiously they came to be counted as national treasures: Mothers of Holy Shit. He fed them the magic pill, you see, the pill that made them shit and shit and shit so voluminously a jungle sprung around them. Just look. Just look at the abundance around them, it’s all down to the pill The Chaiwala fed them in singular pursuit of his keen sense of national duty. The more the shit, the greater the service to the nation. Shit and serve. Or rather, induce shit and serve. Mahadeb, and sundry chaiwalas, do take note. This is how national duty is done.

We underestimate TheBossOfAllThings, criminally so. We assumed last week that he shall enlighten us on DhanKiBaat. Trust him to spring a surprise. He went further and spoke to us of GobarDhanKiBaat. GobarDhan, the sheer richness of it. It goes down, plop, and turns a many-splendoured thing, from manure to medicine for the most arcane ailment. It flies up, pfffffft, and turns a piece of art beginning with an F. You get the drift. It’s tremendously powerful, the drift of GobarGas. And there’s entire armadas of it scudding about. It has been scientifically established, after all, that one bovine entity is able to expel as much as 100 kilos of pfffft every year. And we have a population of those running into several millions; and now that the WowVigilante’s have taken it upon themselves to zealously, even murderously, protect and preserve, the count is going up, As is pffffft! It’s one of the things that’s able to effortlessly blow holes in the ozone layer. Now many people think that’s not such a good thing, this business of excreted methane and what it does to the atmosphere, but them folks are reduced, mundane folks, they cannot see beyond. It’s when you blow holes in the ozone that you get a peek at the heavens, and it’s through them holes that real wisdoms come to drop upon us. Now where would we be without GobarDhan, or the man who as recently as last Sunday took time off to inform the nation of its earthly and unearthly richness.

Be not ashamed should some one sayYour brains are full of dungTell them the truth, Oh, but heyShit is what had the nation swung.