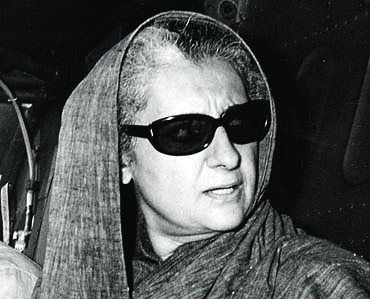 Just a footnote, if you will, to the annual rite of fuming and frothing over the Emergency, now that it is beginning to ebb and settle: there were many more that suffered and refused to submit than those that each year parade the stage, brandishing medallions of victimhood and rekindling rage. The drumbeaters and town criers of the sangh and the Bharatiya Janata Party would have you somehow believe by their sheer orchestration of decibels that the Emergency was an atrocity intentioned at their creed and leadership; the truth is it was an offensive against the Indian nation, and it was the Indian collective that eventually shook it off. Some of the most stirring and resonant opposition to Indira Gandhi’s 19-month tyranny came in fact from those that are no longer around to claim ownership of those voices, much less trumpet them.

Rashtrakavi Ramdhari Singh Dinkar and his laconic challenge that was to become a popular cry: Singhaasan khaali karo, ki janata aati hai (Vacate the throne, for here come the people). Dushyant Kumar and his cutting turn of verse: “Woh kehti hain humse cooperate keejiye, chaaku ki pasliyon se guzaarish toh dekhiye (She says cooperate with me, such is the entreaty of the knife to the ribs)”. Nagarjun and his easy sarcasm: ” Induji Induji kya hua aapko, satta ki masti mein bhool gayeen baap ko (What happened to you Indu ji, just what; in your lust for power, you forgot your father)”.

Perhaps only a war could do what the Emergency also did – put together a coalition of diverse and disparate sets – socialists and communists, republicans and conservatives, writers, painters, journalists, students, teachers, rights activists, minorities and majoritarians – a multitude of the ordinary Indian who rallied in unprecedented ways and, when the opportunity arrived, effected a popular and peaceful putsch against the spell of dictatorship; only a few of them were votaries of the sangh or the Jana Sangh as the predecessor entity of the BJP was known. Yes, there were among the select victims such names as Atal Bihari Vajpayee, Lal Krishna Advani, Balasaheb Deoras, Subramanian Swamy, Narendra Modi and Arun Jaitley.

But there were others – many others -who were subjects of excesses and who fought back – Morarji Desai, George Fernandes, Charan Singh, Karpoori Thakur, Parkash Singh Badal, E.M.S. Namboodiripad and A.K. Gopalan, Devi Lal and Sharad Yadav, Lalu Prasad and Nitish Kumar, Prakash Karat and Sitaram Yechury. And, later, Jagjivan Ram and Hemvati Nandan Bahuguna. Among them was also a man called Chandra Shekhar, whose death anniversary falls this weekend. And they all rallied around the frail risen finger of an ageing warrior called Jayaprakash Narayan, or JP – Congressman, socialist, rebel.

But then, the sangh‘s appropriations committee is a hungry, though unthinking, beast; it will grab at anything within sight to feed its appetite for grandeur that it has never deserved with astounding far-fetchedness. It has tried, for instance, copy-pasting Bhagat Singh to its rather poorly gallery of icons – a professed left-wing atheist snatched away and planted as motif of the sectarian, majoritarian, exclusionist Right. Not very dissimilar is the sangh‘s effort to appropriate Emergency victimhood. Its Emergency record is, at best, chequered and, very often, dubious. Its leading lights wrote missives to the Indira regime pleading submission and often support; they begged out of jail pledging “good behaviour” and abstention from participation in any manner of politics. Some of that pusillanimity led Subramanian Swamy to remark once that the sangh‘s claims to Emergency valour were “ludicrous”.

It is essential to remember the Emergency – as something that should never be allowed to happen again, as something the citizenry should forever be vigilant against. It was an alarming decree by an insecure leader whose legitimacy to remain in office had been bluntly vacated. Indira Gandhi and her coterie of extra-constitutional factotums resorted to blatant abuse and subversion to not merely cling on to power but to chain, gag and torture the nation with them. Surely there would have been sneaking approval in sanghi quarters of some of Sanjay Gandhi’s roughneck tyrannies, especially his shotgun sterilization campaigns, his bulldozer run at Turkman Gate. And where, pray, are Sanjay Gandhi’s legatees today, Maneka and Varun Gandhi? In the BJP. A case can fairly be made that with all its reputed Hitler-love, the sangh would have been rather enamoured of the Emergency Indira – authoritarian, cultish, absolute, demanding deference to outlined purposes of the nation which were actually the purposes of her own hold over power – Indira is India, India is Indira. That, in fact, is a power profile that sits remarkably, and alarmingly, well on the Narendra Modi scheme. Each of the attributes of the Emergency Indira finds reflection in Modi whose essential manner is of a hectoring command creature that would brook nothing less than compliance, not merely from his party and government but at large. He seeks, just like Indira Gandhi during the Emergency, a “committed” bureaucracy and judiciary; his tableau of the faithful raucously and unabashedly conflates party, government and nation, and Modi’s own interest as the supreme national interest. If Indira was compared to Durga, Modi has famously and repeatedly been labelled avatar of god, not merely god’s gift to India but god incarnate.

For all that sameness, though, we are not in an Emergency. No. At least not yet. If it helps perspective, here are a few things that did not happen during the Emergency.

Mobs didn’t tie up Dalits, they didn’t whip them and they didn’t film that whipping. A Hindu woman marrying a Muslim man was not called a victim of love jihad. She was not sought to be separated from her spouse. She was not asked why she has not changed her name, or why she should be granted a passport. Prime investigating agencies were not assigned to probe inter-faith marriages. Elected representatives did not issue sectarian calls to kill. They were not, then, celebrated for what they had done. Nobody was asked to go to Pakistan. Governors did not sit in Raj Bhavans and spend their time trying to excel at bigotry. Mahatma Gandhi’s assassin was not openly and defiantly propitiated. Maharana Pratap did not defeat Akbar in battle, and myth was not daily dished out as history. Journalists were jailed, yes, but later released; they were not shot at their doorstep. Nor were they routinely labelled presstitutes and anti-nationals. Mobs did not go chasing after cattle-traders and beat and lynch them. Mobs did not burst into someone’s home, sniffing at offence, following the scent of meat and killing the ‘offender’. Rumour was not a lynch mill. A young man was not tied to the front of a jeep and made a shoddy example of. Such atrocity was not thereafter officially commended. Senior ministers of government were not subjected to a hail of abusive trolling and threatening. They were not left to fend for themselves. They did not have to feel that the hounding was an insider job, that the hounds were at work under proactive encouragement from the master.

All of this, and worse, are happening now. Lest we forget.