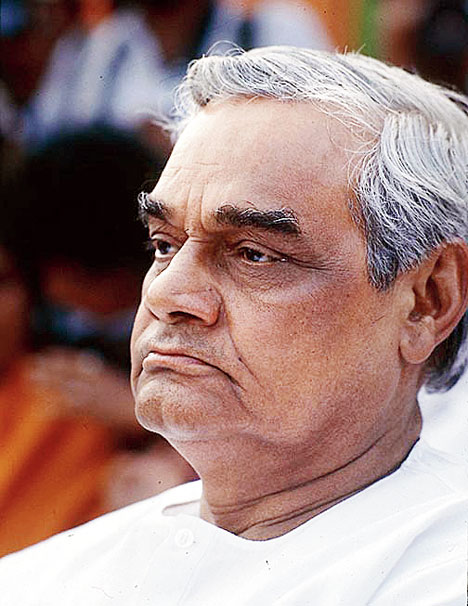 He had gone from our midst long before his appointed departure, an insistent, genial, and very often brilliant presence shrivelled to the irreversible demands of time, defying expiry yet relentlessly fading away behind the high barricading of his bungalow in Lutyens’ Delhi. The last most of us saw of him was in a photograph from 2015, being conferred the Bharat Ratna by Pranab Mukherjee, no more than his eyes and a lock of his fabled wavy hair visible. For quite a while now, Atal Bihari Vajpayee had existed not as himself but as a notion, become a memory in his own time, almost as if he were casting his last trick as an artist of the floating world, an orator of a long silence.

In death, as in life, he tormented grasp and definition. Who was the real Atal ji? He never let on, and that’s the caper he rode to become who he was – many things to many people, often too many for his own good, or for others.

Several times in his long roller-coaster career, Vajpayee lived on by threatening to announce his demise, by bluster and by blackmail aimed at his own. In 1972, he had the Jan Sangh in an angry twist with his description of post-Bangladesh Indira as an avatar of Durga. The party was in a roil, ready to throw out its president. When matters went to the general council, Vajpayee announced he was stepping down, he couldn’t preside over a court where he was in the dock. The party fell at his feet, he sugar-laced his facile victory with an elaborate peroration that many believed was an expression of regret. Decades later, when Venkaiah Naidu dropped the Advani brick on his prime ministerial foot, he recoiled in a petulant fit: “Agla chunav Advaniji ke netritva mein ladenge (We’ll contest the next elections under Advani’s leadership)”. Naidu was the first to fall at his feet in remorse. The party followed him. Vajpayee, satisfied at the quantum of apology heaped around him, declared fulsome intent to lumber on. “Naa tired hain, naa retired hain (I am neither tired, nor retired)”.

He spent a fair part of his public life attached with the promise of becoming prime minister, and eventually got there. To the seat that Jawaharlal Nehru, ideological adversary and personal idol, had occupied. He managed, after two faltering tries, a full run in office. He had his highs, his moments of triumph. He had his share of adulation, perhaps more than he deserved. For his insistent will to shake hands with Pakistan. For his Pokhran defiance. For carving the beginnings of a new course in Kashmir. For creating, in perception if not in reality, a soft core in a hard party. For being a deft practitioner of the hazardous art of coalitions – the first prime minister to last a full term astride a medley. For his agency to convene and conduct adversarial political forces. The first man in a long time to be conceded, even by adversaries, the title of statesman, even though many will quarrel with it, and for good reason. No matter what the colour or shape of your worldview or politics, it was forever tough to deny Vajpayee the stations he came to.

Vajpayee’s PMO was a construct of survival, a place where he jumped the barricades to escape the ivy embrace of his saffron brotherhood. In that sense, Vajpayee was like no other prime minister before him. He ruled at the expense of his own party and, when convenient, by feigning distance from its ideology. He ruled at the pleasure of his allies and very often at the displeasure of the Bharatiya Janata Party and the sangh. Govindacharya bequeathed public memory a few lasting truths about the nature of Atal Bihari Vajpayee. The most durable among them was that the man was a mukhauta, a mask. He changed faces. All too often. He went to Staten Island off New York and told a congregation of Hindu priests he was a born swayamsevak. A day later, he corrected himself before a not entirely Hindu press corps; he only meant he was a swayamsevak of the country, not of the sangh alone. He moaned and groaned over the demolition of the Babri Masjid and wrote guilt-ridden poetry. Then he called the outrage the consequence of “nationalist sentiment”.

He lived with Narendra Modi and the Gujarat genocide. He arrived to wipe tears a month later when tears and blood alike had dried. He reminded Modi apparently harshly of raj dharma, shed sentiment at the Shah Alam camp in the morning and turned up to heap marigolds on Modi in the evening. He called Gujarat a blot but patted Modi on the back and prodded him to lead the party’s election campaign in Gujarat. He aped Nehru’s style and liberal demeanour, he flirted with Gandhi’s ideology. He submitted himself, repeatedly and regularly, to shadowy creatures from Nagpur. His poetry was about irreverence, revolt; his politics was downright conformist, slave to survival and other daily conveniences.

Vajpayee was a late-life accident in the era of compromises but he became a neuter core of those compromises. His wings reeked inertia and undoing when they needed to flap. He became shelter to sectarian hatred, he was sanctuary to all manner of perfidy. Not the least among them was the one that he got away with himself – his popular portraiture will forever abjure khaki knickers; the truth is, he always wore them, and seldom let on.

It is for nobody to guess what he would have thought of the unabashed power-cult that his successor BJP prime minister, Narendra Modi, has built around himself, and the politics of sectarian exclusion he belligerently and unapologetically spurs. What can be fairly said is that Modi’s bellicose demeanour has bequeathed the Vajpayee legacy the favour of being cast in a much gentler light.